Medical Clowns on the Roster for Kids Recovery in Israel

Medical Clowns on the Roster for Kids Recovery in Israel

Across Israel, clowns are popping up in emergency rooms, operating theatres and rehabilitation hospitals.  And while it might seem that they’re “clowning around”, these entertainers are an integral part of the medical team, reducing anxiety and boosting recovery through laughter therapy.

I had the opportunity to witness these medical clowns in action first hand, through William Buck’s partnership with Hadassah Australia.

Hadassah International, of which Hadassah Australia is a member, is a humanitarian organisation.  Comprising of men and women of all faiths and nationalities, Hadassah builds bridges between nations through cooperative medical research, education and clinical ventures.

My visit started at the Children’s Hospital of Hadassah in Jerusalem, the “birth-place” of medical clowns in Israel. I was welcomed by the Head of the Children’s Hospital together with the Head Clown “Dush”. This was the first sign as to how important and fully integrated medical clowns are in the hospital’s delivery of paediatric medical services. 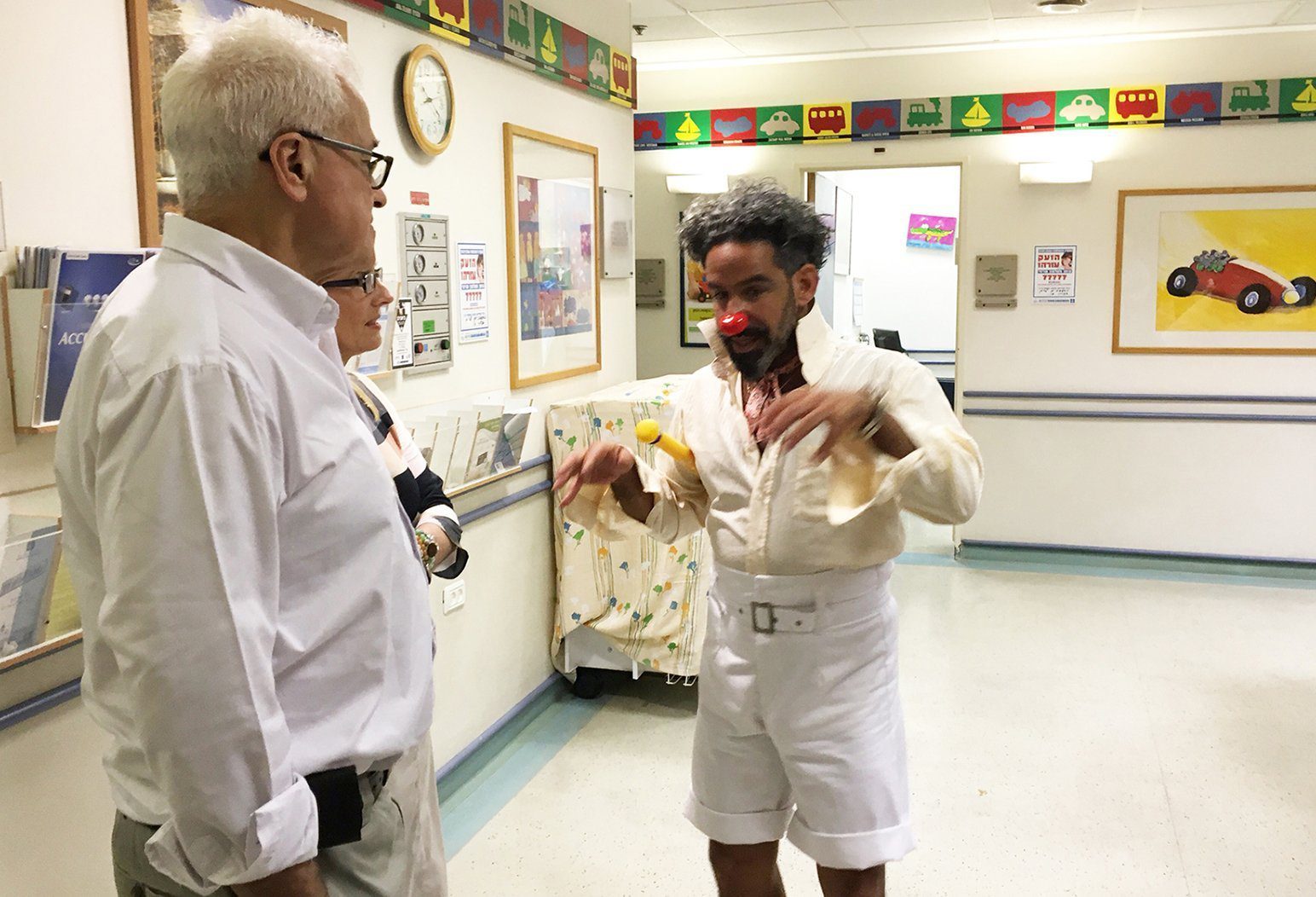 It quickly became apparent that clowning, as a performing art, was not these clown’s sole purpose. Rather, they play an essential part in assisting the hospital to deliver better patient outcomes by significantly reducing anxiety and discomfort.

The clowns have the ability to engage with the patients and their families in a way the other medical staff cannot.  In most cases a clown will spend 5-10 minutes with a patient before the scheduled doctor visit.  By “working their magic” with the child and their family, the clowns create a far more positive hospital experience for them.

There are clowns and entertainers in hospitals around Australia, that is true. Their presence, however, is restricted to the hospitals wards and waiting areas.  In Israel, clowns can be found in clinical treatment rooms, operating theatres and even emergency rooms.  Not only are they present but they actively participate in over 30 medical procedures. These include blood tests, radiation treatment, the examination of sexual assault victims and burn treatments.

During my time in Israel, I had the opportunity to see the medical clowns in a range of settings including; day clinics, oncology, ER, radiology, long-term rehabilitation and autism rehabilitation. It was fascinating to see that just as doctors specialise in different fields of medicine, so too do the clowns with each adapting to the environment and needs of their patients.

In the children’s rehabilitation centre, I spent some time with a three-year-old who’d accidently been shot in the head by his older brother while playing with their policeman father’s pistol.  The boy was undertaking a physiotherapy session with both a professional physiotherapist and a clown. 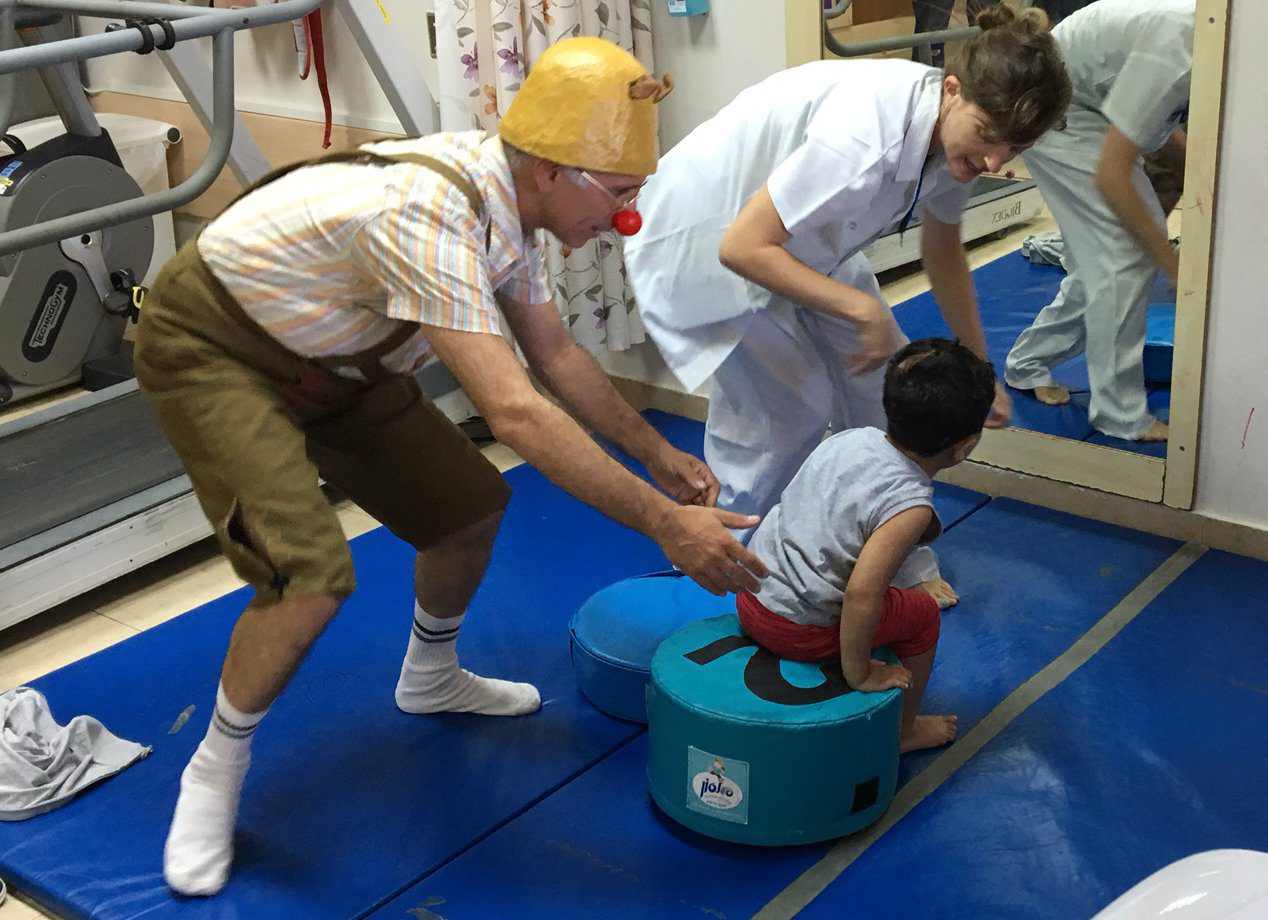 Enthralled by the clown, the young patient barely noticed the physiotherapist.  By working together, however, the two professionals were able to guide the child through his exercises and achieve the session’s goals while having fun. In a briefing after that session, the physiotherapist explained that it is virtually impossible to ask a three-year-old to repeat certain movements in the same way as you would ask an adult. The medical clowns allow physiotherapists to deliver treatments in a way that wasn’t available to them before.

Later, in the Oncology Department I joined Head Clown Dush on his “rounds”.  Such departments (like the illnesses they treat) can cause great stress, discomfort and sadness for children and their families.

It was an absolute privilege to see how Dush turned tears into laughter as he accompanied a crying child into the examination room.  At the same time, a huge smile appeared on the mother’s face, probably for the first time since she had gotten to the hospital that day.  What followed was the same medical procedure but delivered differently. Dush participated in the treatment with the nurse and the doctor.  He was part of the team.

I was surprised that the benefits are not just for the patients.  Speaking to the doctors and other medical staff it’s clear the clowns also help reduce staff stress. In all hospitals, staff were very happy to share with me the positive impact the clowns have on their work. As one nurse explained:

“imagine a nine-hour shift which includes about eight hours of non-stop crying in the waiting area and treatment rooms. Imagine the stress of knowing you’re about to deliver a painful procedure to a child and the drama that goes with it. Now imagine the same shift with clowns on the roster.  When you walk into a treatment room where a clown has already spent 5 minutes, there’s significantly less crying, in fact the child is usually laughing.  I know which shift I’d prefer.”

Finally, on day three I met the Tsour Shariqui, Executive Director behind the organisation that makes it all happen; The Dream Doctors Project. This non-for-profit charity recruits, trains and supports the medical clowns. Most hospitals in Israel do not have a budget for clowns. The program is funded by donations from Israel and around the world.

After seeing them in action, it came as no surprise that it takes a unique blend of skills to even be considered as a medical clown in Israel.

hese heroes have to be of certain age to start the program, they have to be great team players in order to navigate through hospital politics. They need to have the mental capacity to put on a show while witnessing pain and deadly diseases, and they need a lot of self-confidence as they work alone, not in pairs.

Each clown goes through a rigorous five months of pre-job training and are required to complete an additional 20 hours of training every year. One of the universities in Israel even run a fully recognised degree which is mainly focussed on clowning but includes some components of nursing. It’s official, medical clowning in Israel is a serious affair!

To help deal with the associated stresses, The Dream Doctors Project also provides the clowns with a forum to share their experiences, together with regular counselling.

Having spent three days witness the clowns in action, I have no doubt as to the significant role they play.  However, some may be sceptical.   Dr Noam Bor and his medical research team from Technion University set about determining their impact.  The challenge is; how do you measure anxiety and discomfort?

Using technology to analyse facial muscle movements together with audio recorders, children and their parents were recorded in the emergency room with and without clowns. The results were not surprising. Those who were lucky to engage with a medical clown displayed less anxious expressions and cried less.

The mission of hospitals can often be described as having two limbs:

The medical clowns in Israel certainly assist in achieving the second one.

It was a humbling experience to witness firsthand how so many good and smart people are having such a huge impact on people’s lives. I would like to see this program brought to Australia to help us change lives here too.  I look forward to a long relationship with Hadassah Australia and supporting the Dream Doctors’ programme.