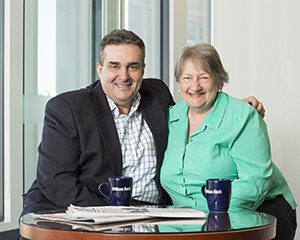 Our new segment ‘Two of a Kind” looks at some of the most interesting relationships across William Buck; between directors, clients, employees and the wider community.

When Margaret Broadhurst first started at William Buck over ten years ago little did she imagine that she’d be counting National Chairman Nick Hatzistergos among her closest friends and advocates.

MARGARET BROADHURST (MB): I had my interview on a wet Friday afternoon.  I’d been retired for about 8 or 9 months and had intended to retire full time – but then I get bored.  My husband, Ron, drove me to the city and on the way I kept thinking “Do I really want to go back to work? Am I too old for this?”

Ron drove around the block while he was waiting, and the blocks got bigger and bigger; I was having a great old chat, and by the end of it I thought, “yeah I can handle this.”

NICK HATZISTERGOS (NH): I remember that afternoon, our General Manager, Lynda told me she’d found us a new records manager, she had the necessary skills, the right experience and a great attitude, there was just one concern; at 55 she was bit older than our previous records manager.

But our attitude has always been to hire the best person for the job, so we made her an offer.

Lunch at the Spanish Club

MB:  The first time I met Nick was just before our Christmas lunch.  It was at the Spanish Club, and I really didn’t want to go.  I was very involved in what I was doing and didn’t take much notice of this chap that was standing beside my desk – I said “Can’t I get out of this lunch?”  Little did I know that he was our Managing Director!  I was so embarrassed I avoided him for weeks.   Then over time I thought “this is silly” he’s just a person, I should talk to him, and that was the start of our friendship.

NH:  I noticed the impact Margaret had on the firm before I even got to know her.  Within a matter of weeks she was making a real difference; directors were commenting on how easy it was to find what they needed.

We were hoping she had a sister we could employ!

Becoming friends with people who aren’t your age

NH: Margaret was reluctant to get involved in William Buck’s social life; she thought that was for the ‘young ones’ so I asked my PA to recruit her for our social club committee.

I knew Margaret would get a lot out of it, plus I wanted someone on the committee who I rely on.  Contributing to the firms’ social club is important to the directors and its important t that the funds are used to the benefit of everyone.

MB:  You recruited me for the committee?  Well that’s a surprise to me!

It was probably for the best, the people and the work keep me young.   I’ve actually thanked Nick for not letting me retire.  I see other people my age who aren’t active, they complain a lot and they have very little to talk about.  I don’t want to be like that, my brain isn’t wired that way, working here my brain simply has to keep going.

I have a new mantra which I keep pinned to my desk “Become friends with people who aren’t your age.  Hang out with people whose first language is not the same as yours. This is how you grow”

William Buck and specifically Nick have given me the chance to do this.

NH:  When I pass people in the office I’m often preoccupied, I’m thinking about the next meeting or client issue and I don’t always say hello or acknowledge them.  People have pointed this out, sometimes they think I’m just rude.

But Margaret is the one who consistently picks me up on this.  If I walk past without acknowledging her I get a quick (and pointed) “Good Morning Nick” – you just can’t miss her.  It keeps me grounded and I find myself back tracking to have a chat with everyone.

MB:  How did I get to know Nick?  I just talked to him as I’d talk to anyone else.  I think some of the staff are missing an opportunity and that’s not fair on them or Nick.   They might be nervous because of his position, but he’s just a nice man, plain and simple.

Moussaka in the boardroom

MB:  For my 65th birthday Nick cooked a boardroom lunch for the admin team, It was very unexpected.  I left the menu to Nick, whatever he was willing to cook I was happy to eat!

NH:  Cooking for Margaret was just a small gesture.  I could have bought her a present but the one thing I’ve always valued is when people give me their time.  My cooking’s probably not as good as Margaret’s but I gave it my best shot.

Honey and Going to War

NH:  We’ve been through a number changes, including mergers, an office move and a new electronic document management system.  Over the years, I’ve seen a lot of people contribute; but I tell you what if I ever had to go to war I’d want Margaret to have my back.

She’s dedicated, adaptive and I’ve never known her to flinch at doing whatever was necessary to get the job done.  I just can’t believe someone in their sixties (who certainly doesn’t need to work) puts in so much effort.

MB:  I know I can count on Nick, if I need something I just need to ask

I’d do anything in return.  When I went to Greece a few years ago, Nick asked me to bring back a kilo of his favourite honey.  I carried that honey everywhere with me, I didn’t put it down once!

NH:  When Margaret filled out her last performance review I handed it back to her and told her to get serious; I wanted a 5 year plan.  She’s simply not allowed to retire, at least not until I do

MB:  I’ve told you, if you want me to stay you’ll just need to keep the firm growing to keep me challenged.